I’ve decided to play around with writing a monthly recap of our homeschool life. I share a fair bit about homeschooling over on Instagram, but find it quite limiting as far as really exploring things in-depth or really processing my thoughts on a topic. Instagram offers glimpses. Sometimes I think I’d like to have something to look back on that’s meatier than a glimpse.

We started back to school the day after Labor Day this year. After a summer of travel, I think we were all ready to collapse into a comfortable, familiar rhythm. We visited seven (!) countries over the summer. That’s crazy. I still would love to write some blog posts about our summer travels, but just haven’t found the time. Normally we like to spread our travel out over the whole year, but as our nine-year-old has gotten more involved in ballet, it has become more challenging to travel during the school year. This is frustrating but it kind of is what it is in this season. We want to support this passion of hers. So that’s how we ended up squeezing seven countries and four U.S. states into three months of travel. I’m tired just thinking about it!

So heading back to school felt like putting on a cozy sweater on the first cool day in fall. 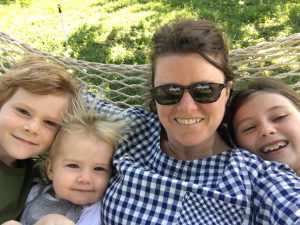 I am using Lavender’s Blue Homeschool’s third grade for my nine-year-old this year. I used first and second grade with her and am now in a pilot group that’s trying out third grade before it is officially released next year. The curriculum is being released one month at a time, which is new for me, and kind of great because it prevents me from getting ahead of myself in the planning department.

One big change for my third grader is that I have purchased a reading curriculum for the first time. I could write a novel about my feelings about Waldorf and specifically how it approaches teaching reading, but I’ll save that for another post. In short, at the end of second grade I felt dissatisfied with what I had been able to teach my kiddo with the resources I had available to me. I wanted to give her the summer, since so many Waldorf folks talk about reading “clicking” after the ninth birthday, which for her was in July. But the click just never came, and I can see now that some basic skills are missing. It’s a ‘when you know better, you do better” situation and I’m trying to give myself grace.

I spent a LOT of time researching various reading curricula and actually ended up with two. We are using The Good and the Beautiful and All About Reading. I like that TGATB was free other than printing and that it’s something she can work on independently as her skills progress (she can’t do it independently yet) and I heard such great things about AAR, so I wanted to give it a shot too. So far, so good. Honestly, it has been challenging to fit these lessons in around everything else we are already doing for school, so we haven’t done as much with it as I would like, but it will be a focus throughout the year. The first time she and I sat down to do an AAR lesson my nine-year-old hugged me at the end and told me how much she loved it. So I think we’re on the right track. (I feel compelled to add that we are primarily secular homeschoolers and TGATB is not secular. I am picking and choosing what we use and skipping parts that are uncomfortable for me – like a page of images of people where a child is supposed to assign gender to each person based on their physical attributes WTF? – but I have not found a lot I felt needed to be skipped.)

My third grader’s block in September was a Farmer Boy math block. It paired reading Farmer Boy with math lessons. We did a lot of review of concepts covered in second grade, like place value and the times tables, and there were new concepts like addition and subtraction with remainders and division with regrouping. Honestly a few years ago I would not have believed that I would be capable of teaching these concepts to my kids. I was pretty awful at math, or at least I was awful at the way math was taught to me. But this math just makes sense! The Lavender’s Blue curriculum uses color and story a lot in teaching math, and this approach really resonates with my kid. Plus the main lesson pages are so pretty, aren’t they? I cannot say enough good things about how much we loved this block. 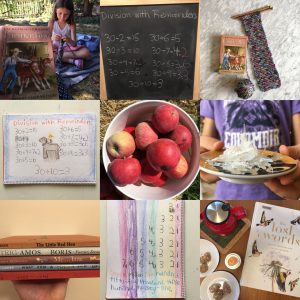 Up until this year I would have considered that a complete description of what my oldest child is doing for school. But more and more I am opening myself up to taking into account ALL of the things my kids are learning and doing, often outside of our “school” hours. It’s just that the Farmer Boy block is where I put most of *my* effort as her teacher, but that doesn’t necessarily mean that’s the most meaningful part of my child’s education! Other huge parts of her life right now are a Friday nature program she goes to, an art class, field trips, endless free play and storytelling she does on her own, crafting, baking, and more. She is in a new level in ballet this year and has been cast in the Nutcracker, which is so very exciting.

September was the first month where I had a kindergartner in the mix! Last year I did a very gentle rhythm with my middle child, where I would tell him a little story three days in a row, and sometimes we would do a craft or art project to go along with it. This year I am building on that rhythm and trying to be more consistent about it. Last year, with a one-year-old in the mix, I tried not to be hard on myself if my four-year-old’s activity got dropped. Wet-on-wet watercolor painting is just not that therapeutic or relaxing when you have a toddler screaming right next to you. Ask me how I know. We recently took the leap to hire a babysitter for our toddler for a few mornings a week so I can focus on my nine-year-old and five-year-old. It’s a very new change for us and so far has been such a positive experience. I plan on writing more about that in the near future.

This year I am focusing more on consistency with my now five-year-old. I am using an eclectic mix of resources with him, including Lavender’s Blue Homeschool’s Kindergarten, Whole Family Rhythms seasonal guides, My Hearth Magic’s circle times and stories from Suzanne Down.

The big difference between my first child and my second child is that I am (gasp!) teaching my five-year-old how to read. I mean … we are at the very early stages. But I have decided not to hold off until seven to present letters and early math concepts to him. Refer to above frustration with how Waldorf approaches language arts. I also honestly just felt like it would be impossible for me to have my middle child with me while I educate his big sister, and hold off on these things for another two whole years. It just didn’t sit right with me. So we are using The Good and the Beautiful’s Pre-K materials right now and I also have the Kindergarten Primer ready to go for when he’s ready for it. So far it’s an incredibly short piece of our routine and on a gut-check level I feel really good about it. Adding this piece to his routine has been quite seamless, actually, because last year between our circle time and his story I would practice his speech therapy sounds with him. And this quick lesson is just sliding right into that spot.

One of my big frustrations with teaching reading to my oldest child is that she never seemed to fully grasp the connection between the letters and the sounds they make. This could certainly be operator error on my part. I am not a trained Waldorf teacher. But I have spoken to quite a few mothers whose children struggled to learn to read with a Waldorf approach. I do think my five-year-old has such a huge leg up because he has been focused on the sounds that letters make for over a year in speech! So I am just bringing visual awareness to him that those sounds are represented by letters that you can see written on the page.

In September my main math focus with my kindergartner was teaching the numbers 1-10 and just exploring numeracy through great books. Some of the books he’s been enjoying are Anno’s Counting Book, Baby Bear Counts One, Countablock and One Hundred Hungry Ants. 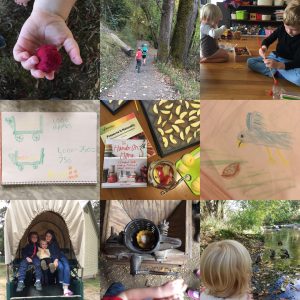 This post ended up being way more of a curriculum chat than I intended it to be. But with such a busy summer, September really was a planning month for me. I knew that I had Lavender’s Blue lined up and that I also wanted to bring a more eclectic mix of resources to my kids and September was the first opportunity I really had to look at our options and make some choices. This was also aided by the fact that at the very end of August we found out that we had been accepted into a charter school here in Oregon that supports homeschoolers. The school provides funds for purchasing curriculum and supplies (and pays for extracurricular stuff like ballet!) and in exchange I’m responsible for creating an Individualized Learning Plan for each of my kids and checking in with a teacher regularly via email.

I have never really spent a ton of money on homeschool resources. It has always been a priority for us to spend money on experiences, so while some people spend a lot on trying out five different curricula, we spent it on airplane tickets and museum admissions. The charter school funds have opened up the possibilities which has been a blessing and a curse, so far. I’ve spent a lot of time researching options and I’ve also probably bought things that may not be a great fit. There’s also such a thing as having too many resources – there are some things I am excited to try but just can’t find the time to include them in our school time so far.

But at the same time I’ve been able to buy resources I’ve been wanting to invest in for years but just couldn’t justify the cost. For example, my kindergartner’s math curriculum for the year is going to be Spielgaben. If you’re not familiar with it, it’s a collection of amazing math manipulatives that come with math guides for various projects. The kids are completely in love with it and we’ve barely scratched the surface as far as what we can do with it.

So here’s to trying new things, being open to being wrong and keeping fingers crossed that sometimes we get things right. September was an exciting new beginning for us, and I’m feeling hopeful for the year ahead. Thanks for following along.