October felt like the answer to all of September’s questions. In October we settled into our routine, which in September had me asking “how can I maintain this for nine months???” We found our groove with new curriculum that I spent way too many hours researching in September. And we found a babysitter for our toddler – praise Jesus and hallelujah – so I could finally stop asking “how am I supposed to be able to do all the things and be everything to everyone???” In October I felt a sense of ease I haven’t felt in a long time.

The bulk of October was spent focusing on an autumn farming block with my nine-year-old. The block was very light academically, which was perfect because my nine-year-old was simultaneously so engrossed with her new All About Reading curriculum. So we spent a good chunk of our morning focused on reading and I have been so thrilled with how far she has come with a month of focused effort. I also am patting myself on the back for deciding to go with a reading curriculum because it’s obvious to me that key pieces were missing from my prior attempts at teaching reading to her with our Waldorf curriculum.

The autumn farming block was so fun!!! We were focused on the harvest and food preservation this month (she will do two other farming blocks this year, with different focuses). Some projects we undertook this month included: 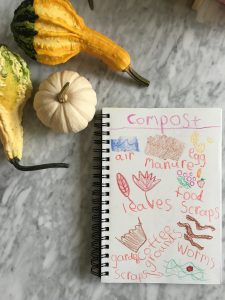 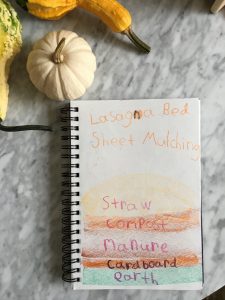 Because we were so focused on reading during our morning lesson time, we often fit these projects into our afternoons or weekends. Since this was not a math block, she also did daily math practice problems from Making Math Meaningful.

So much of October turned out to have a science focus for my third grader, but she also did some fun stuff in the arts. We got to attend the student performance of Napoli, a ballet being put on for the first time in America by Oregon Ballet Theater. My nine-year-old also got to see the play Ella Enchanted with her grandma and now she’s listening to that book on audiobook. She is also in her second month of Nutrcracker rehearsals already!

My older two children are a full four years apart so it can be hard to find common ground for them in homeschooling. But in October our bedtime book was The Trumpet of the Swan and oh my goodness. They both love it so much. My nine-year-old gets the humor more, but my five-year-old has really enjoyed it too. My five-year-old had a speech disorder that he has worked SO HARD to overcome through speech therapy and the character of Louis, who is mute, powerfully resonated with him. The Waldorf world has the term “therapeutic story” and The Trumpet of the Swan has definitely been a therapeutic story for my little guy.

I’ve been super happy with my decision to use The Good and the Beautiful’s Pre-K materials to introduce my five-year-old to letters and early reading. He is so proud of what he’s accomplished so far and he really enjoys the activities and flip books that are included. It’s such a total 180 from Waldorf but feels right and that’s all I’m really after here. 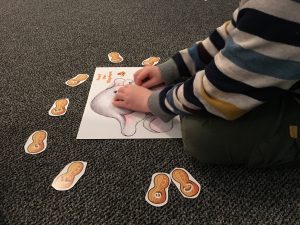 I know I went into it pretty in-depth in my last blog post, but I can’t review October without mentioning that it has been such a blessing to have three uninterrupted hours three days a week to focus on my two big kids. They have spent a lot of the past two years waiting just a sec while mama deals with their little sister and it has been so wonderful to give them my undivided attention. Getting help has been life-changing.

My five-year-old is still so little but getting big all at the same time. On Tuesdays when his sister goes to a class I get to hang out with him still, but on Fridays now he goes along with his big sis to their Forest Fridays program. He is straddling two worlds a bit – sometimes he fits seamlessly with his nine-year-old sister and at other times he is right at home playing with his two-year-old sister. 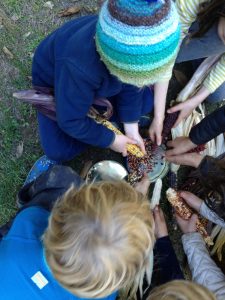 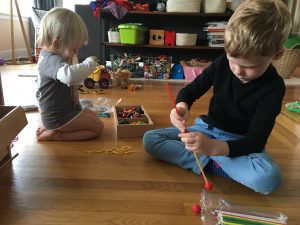 Our very favorite kindergarten activity from this month was building a scarecrow (using my five-year-old’s clothes!) after hearing the story How Witchamaroo Became the Pocket Witch from the book Autumn Tales by Suzanne Down. It is such a sweet story and captures a young child’s imagination so well.

I thought it would be fun to start ending these monthly wrap-ups with some thoughts about Mother Culture. As homeschoolers we talk a lot about what we’re doing for our kids, and I know I always appreciate seeing concrete ideas for how mamas are taking care of themselves. (What is mother culture?)

I read The Great Alone this month and it was amazing. This is the second book of Hannah’s that I’ve read – The Nightingale is really fabulous too. It was really special to read The Great Alone after visiting Alaska this summer because the scenery she described was that much more vivid. The characters were so very human and so very real and I loved the heroine so much. I can’t recommend it enough. (Fair warning – this book deals with some difficult issues like domestic violence.)

In October we were lucky enough to send the kids up to my folks’ house for two (!) weekend overnights. After a super busy summer that spilled into September, it was so needed for my husband and I get some time to catch up both with each other, with our home responsibilities and with friends. One night I slept 12 hours straight! You mamas know how huge that is.

In October I was …

Of course there never seems to be enough time and I wish we could have spent more time outdoors this month, because we sure had amazing weather right up to a few days before Halloween. Now the rain has arrived in the Pacific Northwest and we are preparing to hunker down a bit and read more books by the fire. Looking forward to a cozy and festive November.