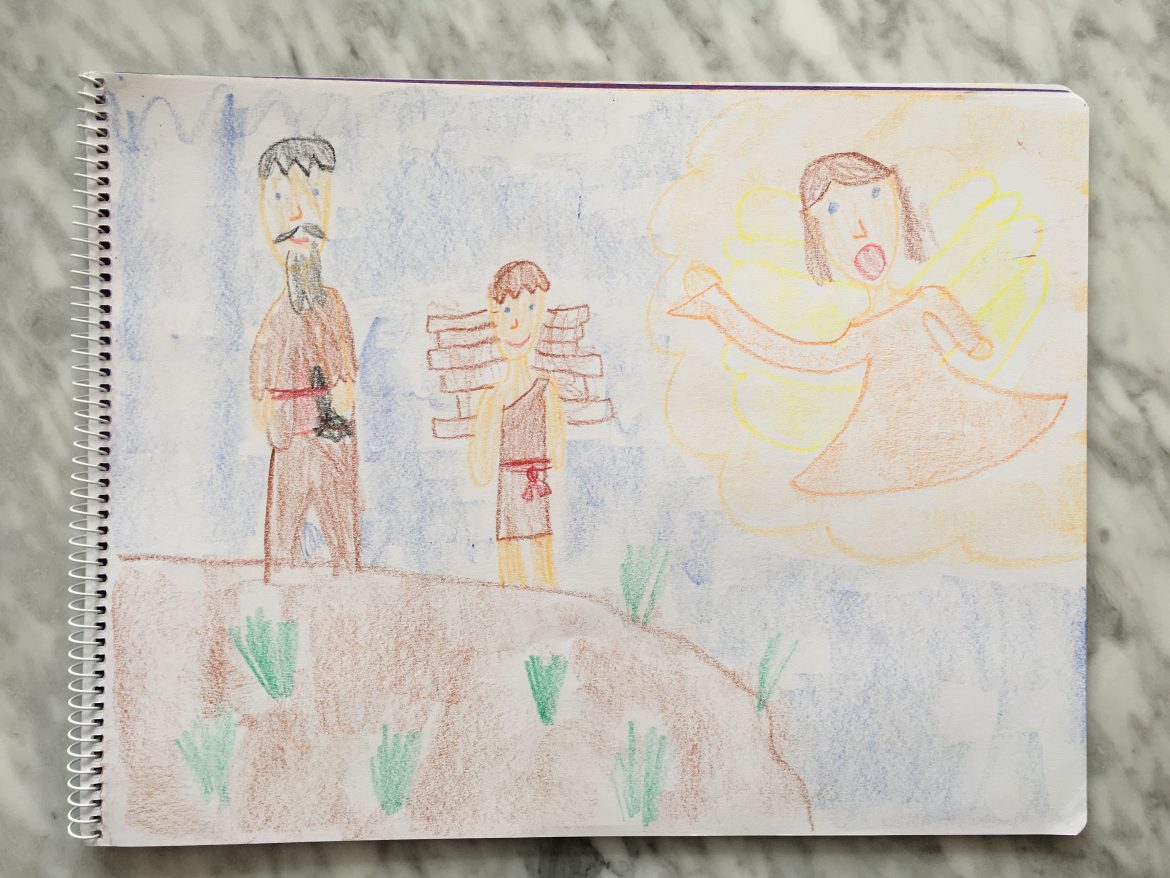 As I look back at photos from our January, there is so much goodness! That’s one of the reasons I love documenting our homeschool with photos and writing. January was full of lots of cozy learning for us a some fun winter adventures, too.

This month we did a Hebrews block. I wasn’t sure how this block would land with my kiddo. There are those who say that the stories from the Old Testament are perfectly positioned to meet the nine year old child where they are at, developmentally. There are others who say that their kids didn’t connect with the Old Testament stories at all. So I didn’t have big expectations going into it, but my kiddo (and I!) really enjoyed this block a lot. The stories are so powerful and for some of them it was my first time hearing them in their entirety! These were not watered-down Sunday school versions, but very full and powerful (and sometimes difficult) stories. We chose to use the Jewish Publication Society’s Illustrated Children’s Bible and I thought it was excellent.

From a skills perspective, this block focused on introducing the capital letters in cursive (she learned lower case in December) and also the first introduction to the parts of speech. I really enjoyed how this was handled (we use Lavender’s Blue Homeschool’s third grade curriculum). After we read the story of Noah’s Ark, we discussed animals and how the names of each animal were something called nouns. Then we built from there, with describing words for each animal, trying to use the capital letters we were learning, so Goofy Gorilla or Nice Narwhal, etc. Then (this was over the course of four weeks) we started building sentences as we added verbs. The dainty deer dines, for example. And then we added adverbs. The lazy lizzard lounges languidly. One thing I notice about Waldorf is that these skills are so easy to teach, and are so easily assimilated, because they are being taught at the right time. My kiddo made huge strides in her writing in this block, both in the mechanics of handwriting (she enjoys cursive way more than print and finds it to be much faster) and in her ability to craft summaries. We are still creating them together and she copies from my writing, but she is definitely taking over quickly.

This was the first block where I have not given my nine-year-old drawings to copy. Since we no longer have a babysitter helping us out in the mornings, I am juggling a toddler and I just haven’t been able to do the drawings. And it’s been fine! Great, actually! I am really enjoying seeing what scenes she chooses to highlight.

Some other resources I used and really liked during this block:

D’Nealian Handwriting Cursive ABC Book and this cheat sheet from Logic of English, which explains which capital letters connect and which don’t.

Heroes of the Bible Treasury (for read aloud practice)

Noah’s Ark (the illustrations in this are wonderful)

Gosh I love kindergarten. My five-year-old is getting up to all sorts of fun stuff, like baking with his mama (lucky me!), going on hikes, playing with his sisters and reading lots of books by the fire. I asked my kindergartner to participate in the Read Aloud Revival Challenge this month. Mostly I wanted my oldest child to get into a better habit of reading to herself daily. But I told my five-year-old that his assignment was to pick a book every day and tell his two-year-old sister about the pictures. It was the cutest thing ever. As a reward for their diligence, we’re going to an indoor swimming pool with a slide in February.

My five-year-old became completely obsessed with the Who Would Win series of books this month, and so far we have read through Killer Whale vs. Great White Shark, Lion vs. Tiger, T. Rex vs. Velociraptor, and Polar Bear vs. Grizzly Bear! My kids also got way into a show called The Day the Dinosaurs Died with my husband, and I just love the learning stuff that they can do with him.

OK so my kids went to a birthday party this month that I just have to talk about here, because it was seriously educational! It was hosted at a terrarium shop. The owner (who I learned later homeschooled his seven kids!) was really wonderful and talked with the kids about the huge impact the invention of the terrarium made on human history. Before terrariums were invented, the vast majority of plants that were transported across the ocean died in transit. After botanist Nathaniel Ward invented the terrarium in 1842, people could, say, smuggle tea out of China and change the world economy forever. Fascinating! Then my kids made their own terrariums and we got to bring them home (and they are still alive!).

In December and January my kids and I blasted through a three-book series called The Magical Animal Adoption Agency. I have a hard time finding books that are exciting enough for my nine-year-old and gentle enough for my five-year-old and these fit the bill perfectly. Highly recommend! They would also be great for a child to read to herself.

In January I was …

Knitting … a Poppy Cardigan for my toddler’s doll and a Bracken Sweater for my five-year-old.

Reading … I haven’t been reading much print this month, but I’ve been really grateful for online learning opportunities. I’ve been enjoying Heather Bruggeman’s Hibernate retreat and I just recently joined Jean Miller’s Homeschool with Waldorf learning studio and have been really pleased with her offerings so far.

I hope you are warm and cozy wherever you’re reading from!

December in our homeschool

November in our homeschool